At first I blamed myself: A Mother’s story

I have been asked to write a piece on what it meant to have a daughter diagnosed with MRKH, so here goes.

My eldest daughter Claire was born Oct 1975 after a long and difficult 28hour labour which ended with a breech birth. I was over the moon as I’d been calling her Claire all the way through my pregnancy. When anyone asks, suppose it’s a boy? I’d answer well it will be Clarence.

Claire was a very easy baby, never had a night feed and wasn’t very keen on solids either when I tried to wean her. The only odd thing I noticed at the time was a slightly misshapen bottom and bottom line veering to one side. Claire didn’t crawl but bum shuffled and could stand up straight from a sitting position without holding on to anything. Quite the party piece!

In 1978 and 1981 I had two more daughters, again difficult labours, but normal delivery.

Claire reached puberty and developed normally and had a lovely figure at 13. I suppose about this time we assumed her periods would shortly start. I wasn’t overly concerned because my mother didn’t start her periods until she was nineteen about 6 months before her marriage.

So a couple of years went by and my 2nd daughter started her periods aged 13, by this time Claire was 16. I had private health with my job but couldn’t get a female consultant and Claire obviously only wanted to see a lady doctor. It took 6 months to see an NHS consultant and she said it’s probably an imperfect hymen which would need doing under anaesthetic, this took about 6 months. We didn’t really get any proper answers after the op so a CT scan was arranged, again we waited a few months on the NHS.

I actually took the phone call  from my female GP who told me Claire didn’t have a womb! To say I was shocked was unbelievable but unbeknownst to me Claire had picked up the extension and heard it all! She was absolutely devastated as we were. Claire had a career in childcare and obviously wanted her own children one day. I felt enormous guilt and there was no comforting Claire, she felt her life was over before it had even begun.

At this point we were put in touch with a consultant privately in Guildford who eventually told us all about Claire’s condition. By this time Claire was almost 18 so the whole process had taken nearly 2 years! The Dr was called Karen Morton and was very good at explaining everything, drawing diagrams etc. She called the condition Rokitansky syndrome. She went through all the options, there was an operation to create a vagina or a natural way using dilators which Claire opted for. She did say this method could take a year. This was Sept, we went back I think Nov and Claire had already done extremely well with the dilation. We returned again in March and Claire had achieved the correct length. The Dr was very surprised but Claire is very disciplined and determined when necessary.

I’ve just remembered something the Dr said when she asked Claire if she had any questions. Claire asked could there ever be a womb transplant. The Dr replied definitely not in her lifetime, yet less than 10 years later this was achieved!!

So how did I feel when Claire received her diagnosis?

Like the worst person in the world, what had I done, was it my fault. I fell over when I was 6months pregnant on the road, but the Dr said all was well, but I did worry I’d hurt my baby. That was a thought I had when Claire got her diagnosis. I was just so sad for Claire, there was no one to talk to, no booklets to read no help groups etc.. so it truly was an awful time.

I also had another daughter yet to start her periods or not. The Dr in Guildford had told us that it wasn’t hereditary but genetic, a blip after conception when the embryo splits into four and makes the organs. She said no one could be born without kidneys because one section makes one kidney and liver and a different section makes the other kidney and reproductive organs and yet another section makes the heart and ovaries. I can’t remember what the 4th section made. So I suppose at this point I realised it wasn’t my fault after all, but which was of no help to Claire at this time.

When my 3rd daughter started her periods at 13  it was a low point for Claire. It took a long time to accept who she is and she is the most amazing, strong, wonderful girl. She’ll always be a girl to me!

I am so grateful for all the info out there with the support groups and that Claire has a group of ‘sisters’ she can relate to and bounce off. I still wish there had been something for us in 1993 because we had so many questions and not enough answers.

Until I went to the seminar in November 2019 I had never ever met another person with the condition. So it was really surreal to see all these young women the same as Claire. I met a few of her special sisters which was so lovely.  Also I’m glad that it is more recognised with discussions on the radio and even on tv, books to read etc, but it’s been a long time coming. 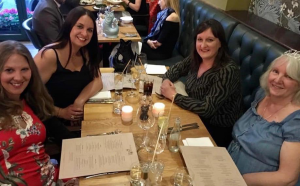 Who knows why there is such a condition as this, but I can say now that my beautiful Claire is a truly amazing person with the right attitude and can help so many with her kind nature and openness about MRKH to anyone who asks.

It has been cathartic to write this but also very difficult as it brought back a lot of sadness but we’ve come through it all the more stronger.

I love you with all my heart.

NB – I once read that maybe Queen Elizabeth the 1st had a form of MRKH. After all, what is the sole purpose of a King or  Queen?  To produce an heir. Considering the problems with Scotland and Mary Queen of Scots, one would have thought Elizabeth would do all she could to have an heir to the English throne, because the alternative was Mary (before Elizabeth had her executed or Mary’s son James 6th. who eventually was named as the heir and became James 1st of England!)

Elizabeth never married , what was the point? I’ve also read how her servants put pigs blood on the sheets monthly to imply periods!

Lastly there is also a very good book called BESS by CONSTANCE PRATT that has an altogether different explanation, but I’ll leave that there just in case you would like to find out for yourselves.