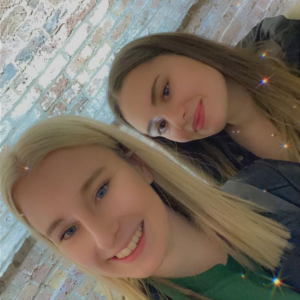 Our diagnosis journeys started with very similar feelings- feeling alone and isolated. Having so many people around us trying to help, when really no one understood what we were going through. We both had incredibly supportive parents, but even they couldn’t help much, because they have children. It was scary to feel so isolated, we were filled with so many questions that no one seemed to be able to answer. We were trying to navigate how we could manage our lives with MRKH having no one who could reassure us of what would happen in the future.

We both started looking online for people who might be able to understand what we were going through and could answer all the questions we had, but it felt weird and almost hurtful to know that the only people who would really get it were strangers on the internet. Vics got lucky when she connected with the community, finding someone almost straightaway who took her under her wing and helped her to cope in a way that made her feel safe and supported, but she lived thousands of miles away, it still felt pretty isolating for a while. It was even harder for Tk, who struggled to make those connections online. One girl reached out to her and she helped answer some of her questions but she didn’t know her. Tk’s doctors kept suggesting people for her to reach out to but it was hard, it was nerve-wracking to approach such a sensitive topic with a stranger. We were both just entering adulthood and dealing with this heart break; we felt lost.

Whilst Vics had the community support and Tk didn’t, Tk did have the medical support and care that took Vics over a year to be able to access, despite us having pretty similar diagnosis journeys. Missing the medical support aspect really affected Vics, by this time she had made lots of friends in the community who helped where they could but all the guidance that she was getting about MRKH and treatment options weren’t coming from doctors, and she needed specialist care, both medically and psychologically and she couldn’t get it. Going so long without it made her feel so lost, whilst Tk was lost in a different sense having only her nurse and therapist as people she could talk to, who were hours away from her and didn’t have MRKH so could only relate to a certain extent. Our journeys almost mirrored each other, but we had no idea the other was out there, facing the same thing at the same time.

Until May 2021, when Vics messaged Tk and she joined Stars. We connected and built Stars into what it is now, turning our pain into power. Not only do we work together, but we have become partners in crime and have created an inseparable friendship. We are always there for each other, and we face the challenges a life with MRKH has presented us with, and we get through them together, as a team.

Those people we were once scared of messaging or trusting, we now have the courage to reach out to, and have made countless MRKH connections across the whole world. Our first year after diagnosis not having each other wasn’t easy, but now we have connected we can talk through, and face the fears that were once so powerful, head-on together. It doesn’t feel so scary anymore.

We call it finding your person, everyone needs their person to help them through life, MRKH isn’t something that should be faced alone, if it was then all the support networks out there wouldn’t be needed. Our first year living with MRKH was full of fear, uncertainty and confusion, but since connecting with each other, we have been able to console each other and work through all of it, whilst also accomplishing goals we never thought possible at this age.