The first time I went to an MRKH support group was in the late 90s, in my home town in Germany. I’d found them by coincidence – this was the time before internet and social media, and me and family has been advised it would be best not to tell anyone about my diagnosis, so in hindsight it’s even more astonishing that I ever came to know about this group.

One person in particular stands out in my memory. I don’t know her name, and I never spoke to her. She only came once. She stood out, because amongst the many stories of trauma, loss, shame and secrecy she said that for her, having MRKH was great, because it meant much more creativity in her intimate relationships. I’m not sure that any of us believed her, to me certainly this comment seemed like coming from another reality, and I think her comment was met with silence.

Now, over 20 years later I would love to know how at a time before internet and social media she was able to arrive at this amazing perspective, and more, I wish I had had the courage to talk to her, perhaps she could have told me a shortcut.

I want to write about some of the things I wish someone had talked about when I attended MRKH support group meetings. This is not to say that the questions I remember being discussed most, like who to tell, and how, surgery and dilation and options for having children aren’t important. They are, but for me they did not hold the answers I have been looking for for the better part of 25 years.

Until about 1.5 years ago I had never knowingly met anyone with MRKH who wasn’t straight. I wonder now how many people I have sat in rooms with over time who, like me, never spoke about their partners. I know I didn’t say anything because homophobia is still a real thing, but perhaps more so because I felt like the only possible response could be that then I didn’t have a problem, so what was I doing coming to support groups? I only once told a doctor involved in a group, and she said she understood why I wouldn’t want to share this. It seemed a kind comment at the time; now I see it as one of the many, most likely unintended, microaggressions that kept me quiet.

For a long time I wondered if I’m not straight because I have MRKH. If being lesbian, or queer, or bi was considered equally good as being straight, my queerness would have been celebrated by my family and by society in general. Perhaps they would have said – how wonderful, MRKH has helped Annette discover diversity (if there indeed was any connection between MRKH and who I like). But instead I have been asked if I avoid men, or just fancy the ones that aren’t really available. I mean, what a skill, right, being so in control of who I like?!

When I think about the question whether I’m not straight because I have MRKH now, I can see how central bodies are to the way society has arranged both gender and sexual identity. It suggests that there is a connection between the way our bodies are, how we and others identify us and who we like as a result. Having a body that doesn’t fit a neat description pulled all of that into question for me, and I know that’s true for others. There is a lot I could say about the homophobic and patriarchal origins of genital surgery, and I recommend Anne Fausto-Sterling’s work to anyone who wants to know more, or Suzanna Kessler’s or Alice Dreger’s work. But mostly I want to write about the difference it made for me to find others who share many of my experiences because they too have bodies that don’t neatly fit a binary. There are over 40 known variations of sex characteristics, with MRKH being one of them, and they are as common as naturally red hair. Some are discovered at birth, some around adolescence, some later in life and some never. In the UK alone that’s about 1.28 million people – as many as had Covid in November 2021, and that was talked about a lot! The silence about how diverse bodies really are, and instead having only two valid templates for bodies, speaks for the extent to which diversity is actively ignored and erased. I recently heard a therapist speak about bodies in ways that were affirmative and inclusive of diversity, rather than the usual comparison listing what I don’t have– she simply described the different ways bodies can look along a spectrum. So simple, and so powerful.

Meeting other intersex people, some of who would describe themselves as intersex and others who would use different words, made me dream of and work for a world where difference is truly celebrated, and not constrained by binaries. I recently came across the picture of a Finnish maternity ward – the door had stickers of the symbols for boys and girls, the trans flag, a rainbow and the intersex flag on it. That’s the world I would like to live in, a world where nobody is assumed to be something – a sex, a gender, a sexuality – based on how they look between their legs at birth. When I started coming out as intersex, one of my good friends baked me a cake in the colours of the intersex flag. I imagine a world where instead of being offered surgery at 16 I would have gotten that cake – like a joyful rite of passage to a newly discovered part of my identity. 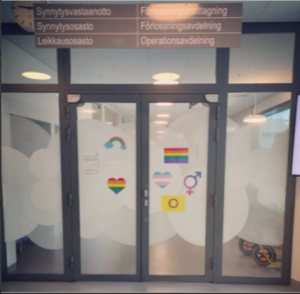 I have a long and complicated history with labels, and in my dream world we don’t need them. But Jespa Jacob Smith convinced me that we do need them, because without them we will be assumed to be something other than we are, like when I go to the doctor and am asked about my last period. I no longer want to be defined by what I am not, or what I don’t have, and embracing being an intersex person allows me to define myself from a different starting point.

I have come to see the tough times I have had as coming up against normative expectations that ignore a lot of the possible options. There would be no coming out if being straight wasn’t the expected norm. I wonder how we would talk about the time of diagnosis if finding out that some people are intersex was part of what society expects.

This has been a hard won and fought for perspective, one that I owe to friends and finally the right therapist – you know who you are -, and others who were brave enough to go public about their experiences, and people who wrote books about intersex perspectives and histories. They created reflections in my world where before there hadn’t been any, and allowed me to see more of who I am and who I can be.

The question of whether I am queer because I have MRKH has finally been put to rest. Who I am and who I like cannot have been tainted by a diagnosis when this diagnosis is really just a way of describing diversity.

A little while ago I bought the most beautiful book – it’s a big hard cover book with pictures and short stories of older trans people, some of who are intersex. Their stories are full of the courage it takes to be who we are in the face of expectations that would have us be otherwise, and also the joy that comes with visibility and pride. I hope this blog contributes to making more space for this joy.